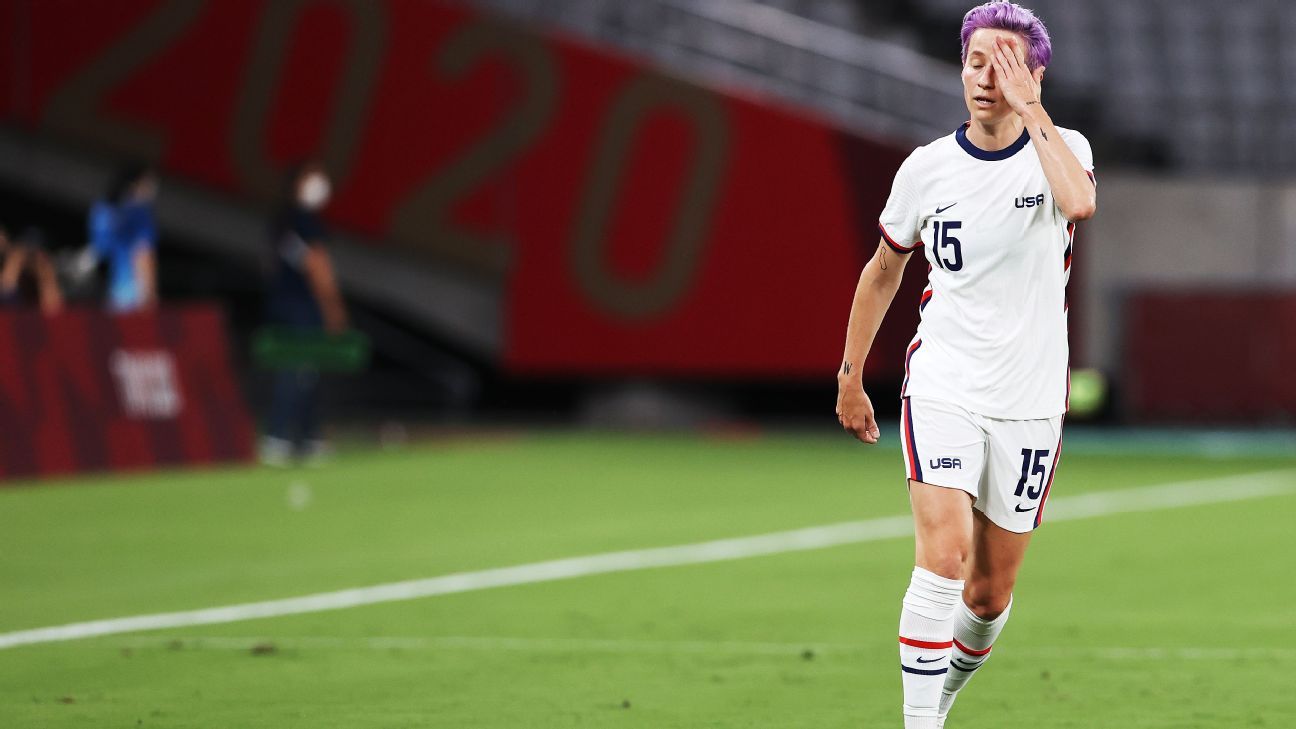 More than a year since a judge dismissed their equal pay lawsuit against the U.S. Soccer Federation, the players of the U.S. women’s national team has appealed, arguing that the judge’s ruling “is legally wrong, and it defies reality.”

The legal team representing the USWNT players, who are in Tokyo competing in the Olympics, filed the appeal on Friday, which asks the appellate court to “reverse the decision of the district court and remand the case for trial.”

“There is nothing quite like entering a stadium and hearing thousands of our supporters vigorously chanting ‘Equal Pay,’ ” winger Tobin Heath said in a statement. “We enter this next phase of our legal fight with the same energy we bring to each of our matches.”

The appeal is the latest twist in the longstanding fight between the USWNT and U.S. Soccer, and ensures it won’t be going away anytime soon.

A judge dismissed the case last year, accepting U.S. Soccer’s accounting that showed the women had been paid more per game than the men. Now, the women are appealing, arguing that the judge ignored how performances increased their pay rate, all while their bonuses for winning were smaller than for the men.

“To argue that women should have to work harder and achieve more in order to earn the same as men is simply wrong — both morally and legally,” midfielder Samantha Mewis said in a statement. “We are pleased to be moving forward with the next phase of our lawsuit so that we can finally achieve what we — and all women — deserve: equality.”

“We believe in our case and know our value,” Megan Rapinoe said in a statement Friday. “It’s time the USSF does too.”

Julie Foudy explains what she feels needs to happen next following the USWNT appeal on equal pay.

When the USWNT’s lawsuit was initially dismissed, perhaps the most surprising part was the judge’s determination that the women had actually been paid more than the men.

He arrived at that conclusion by accepting U.S. Soccer’s explanation that the women had been paid more both cumulatively and on a per-game basis. In U.S. Soccer’s analysis, the men were paid $212,639 per game while the women were paid $220,747, and the judge accepted games played as an appropriate measure for rate of pay.

The USWNT’s appeal pushes back strongly against this conclusion, arguing that performance — that is, winning or losing — can’t be ignored. The women only got paid more because they won more, despite the fact that their available bonuses were lower than for the men. The women won two World Cups during the time period covered in the lawsuit, 2015-2019, while the men failed to qualify for a World Cup.

“The court did not account for performance — specifically, that the women had to be the best in the world to make about the same amount per game as the much less successful men,” the appeal states.

The judge, in rejecting U.S. Soccer’s arguments against class certification, pointed out that just because some USWNT players earned more than some USMNT players, that isn’t proof discrimination hadn’t occurred.

The example he used in 2019 was an office paying a woman $10 per hour and a man $20 per hour — it would be wrong to declare that equal pay just because the woman worked twice as many hours as the man. Rather, he said, the rate of pay needs to be equal.

In the appeal, the USWNT’s legal team goes back to that example and expands on it to account for bonuses. This time, the example is a man and woman who work at a shoe store and earn both an hourly wage and a commission for shoes sold.

“The employer cannot offer its female employees a lower hourly wage, or a lower commission rate, and expect them to work more hours, sell more shoes, or both, to earn the same total compensation as the male employees,” the appeal states.

If the men, for example, hadn’t lost so much in the 2018 World Cup qualifying tournament, even if they still lost every game in Russia at the World Cup, they would’ve earned an average of $256,169 per game, which is more than the women, because of the bonuses they would’ve earned.

“The district court, in effect, used the women’s successes against them,” the appeal brief continues. “That was wrong as a matter of law.”

The appeal adds that even if the judge was right that a violation of the Equal Pay Act hadn’t occurred, a jury could still find a violation of Title VII, which is broader.

Megan Rapinoe explains how US Soccer Federation could become the best organisation in the world by agreeing to equal pay.

As the USWNT is appealing the judge’s initial ruling, they have to stick to the same arguments from their original lawsuit. Again, they say the men were offered far more money than the women, and even though the two teams have different compensation structures, the federation was always willing to offer the men more.

The men on the USMNT are paid on a per-camp basis, meaning individual players only get paid when they get called in — but on the federation’s side, it still sets aside a fixed dollar amount to pay for every USMNT camp. The women, however, are paid on a hybrid structure where some players are paid based on call-ups, but some regular players are paid salaries regardless of making rosters.

The judge in his dismissal last year stated that comparisons between the two collective bargaining agreements (CBAs) “ignores the reality” that the men and women negotiated for different compensation structures and the judge declared that “the WNT explicitly rejected the terms they now seek to retroactively impose of themselves.” But in their appeal, the players say the judge is wrong. Rather, the women have said if they had been offered the exact same contract, they would’ve accepted it, but U.S. Soccer was never willing to match the men’s deal dollar-for-dollar.

“During collective bargaining for the USWNT’s 2017 agreement, the Federation offered the women the same pay structure as the men — that is, it offered to eliminate contracted players and to pay all USWNT players per-game appearance fees and performance bonuses,” the appeal brief states. “But the Federation refused to offer the women the same dollar amounts as the men for appearance fees and performance bonuses.”

U.S. Soccer has said the reason for that is down to FIFA bonuses for winning the World Cup. FIFA provides roughly 13 times more money for the participants of the men’s World Cup than the women’s version, and U.S. Soccer president Cindy Parlow Cone said in June that “to make up the difference in FIFA prize money is untenable, and would likely bankrupt the Federation.”

The appeal also argues that it was not up to a judge to decide that the value of the two contracts cannot be compared, and only a jury is supposed to weigh such evidence.

Furthermore, the appeal argues that established precedent says “an employer cannot bargain away employees’ rights to equal pay under the Equal Pay Act and Title VII,” so the fact that the players negotiated for their compensation isn’t enough to dismiss their allegations of discrimination.

The appeal also makes the case that the federation’s behavior is part of a larger pattern of indifference and discrimination against the women.

It mentions the early days of the USWNT, when the women had fewer staff than the men’s team, and they had to make their own food runs during training and lug around their own equipment while the men had all of that taken handled for them. They also say the federation refused to promote the team’s games or pursue merchandising opportunities.

It also points out something that occurred after they had filed the lawsuit originally March 2019: a number of U.S. Soccer sponsors spoke out against the federation’s treatment of the USWNT. That happened in March 2020, when U.S. Soccer, in defending itself against the lawsuit, argued that the women have less “ability” than their male counterparts because of “the different levels of speed and strength required for the two jobs,” a comment that was widely criticised as misogynistic.

As a result, high-profile sponsors like Coca-Cola, Visa, Deloitte and Budweiser raised concerns, using words like “unacceptable” and “offensive” to describe U.S. Soccer’s view of the USWNT. The appeal notes that Secret took out a full-page advertisement in the New York Times asking U.S. Soccer to “end gender pay inequality once and for all, for all players.”

The appeal also argues that Carlos Cordeiro, the former president of U.S. Soccer, had said that “female players have not been treated equally” and the federation needed “to work toward equal pay for the national teams” — and it was wrong for the judge to accept an after-the-fact explanation where Cordeiro said he didn’t mean the statements how they sounded.

“A reasonable jury could take the Federation at its word,” the appeal states.